Did Tom Brady Say 'if Anyone on My Team Kneels, I Quit'?

NFL and New England Patriots legend, Tom Brady, is the subject of many social media posts after he was quoted to have supposedly said ‘if anyone on my team kneels, I quit’. Brady who is one of the most successful NFL Players of all time is a well liked figure, but these latest comments attributed to him might ruffle some feathers and change a few opinions about him. 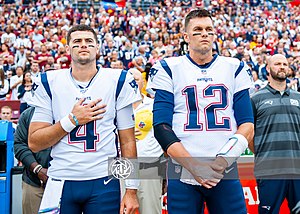 As seen on a post on America's Last Line of Defense, Brady was claimed to have warned any of his teammates who would take part in kneeling during the national anthem in support of the Black Lives Matter Movement not to do so, as he won’t take stand for it. The post had claimed Brady said the following words, ‘I won’t stand for it. I won’t stand for your kneeling. Let me be perfectly clear, if anybody on this team kneels, I walk. I will be off the field and out the door in an instant. Don’t test me.’ It was also said that Brady suggested that kneeling during the national anthem is treasonous, and he also boasted to have won six Super Bowls, which makes him the best and indispensable to the team. Wow!

To set the record straight, Tom Brady never said any of these things, and if the accounts passing these claims around had checked properly, they would have seen that the claim came from a satirical website. The post originated from America’s Last Line of Defense, and it is a satirical website which is in the business of posting fake news for the purpose of humor. They have been doing this for years, and you only need to take a look at their about us page and the other news content on the site to see this clearly. This means you can’t take anything from this site seriously.

Also, Tom Brady has come out in the past to say he has no issue with teammates kneeling during the national anthem. As can be seen in this interview with Oprah Winfrey back in 2018. Brady said ‘I respect why people are doing what they are doing. And they’re doing it for different reasons, and that’s okay’. With all the facts available, it’s clear to see that Tom Brady never made that statement, and the post is misleading.